We first started hearing about COVID-19 (“the coronavirus”) seriously this past January 2020, and most of us didn’t think much of it. There was already a fissure forming between “the left” and “the right” as President Donald Trump shut down flights coming into the United States from China. Then, U.S. House Speaker Nancy Pelosi staged a press conference in San Francisco’s Chinatown in February, inviting tourists to visit the area. Also, President Trump formed the President’s Coronavirus Task Force to “monitor, contain, and mitigate the spread of the virus, while ensuring that the American people have the most accurate and up-to-date health and travel information.

The word “coronavirus” has been around for years, yet it wasn’t until January 2020 that the mainstream media seemed to pick up on it, and the conflict going on between “the right” and “the left”. In fact, now there are seven types of human coronaviruses and this one has been promoted heavily by the general media.

The media was slowly ramping up its coverage of COVID-19 throughout February 2020 and it became nearly non-stop news in March 2020 here in the United States. The media coverage has been the dominant story of our 24-hour news cycle here and throughout the world. Much like our government and health officials, they have been parroting false information that the public soaked up.

My opinion on the matter has remained consistent from the beginning of the year to today. I feel our government and media have over-hyped COVID-19 to the point of reducing any last shred of confidence the American citizenry had for the elected officials, some doctors, and scientists. Much like other disasters, natural or otherwise, it became clear over these many months that the federal government and state and local governments are incompetent. There are many examples, but one that has stuck in the craw of many Americans is why our medical professionals did not have enough N95 rated masks. After the H1N1 debacle regarding not having enough masks in 2009, the federal government seems to have a problem replenishing its stockpile and now the 2020 federal budget has allocated over $700 million to (hopefully) keep things up-to-date.

What I have found interesting about how best to deal with the issue has many people at odds with one another. Even in my Libertarian world, Libertarians are at odds with the best policy to follow. Libertarian Party National Chair Nicholas Sarwark wrote a comprehensive essay titled “A Libertarian Approach to COVID-19“ in mid-April 2020. While Sarwark’s article seemed a reasonable, well thought out statement, he was attacked on social media by not only Republicans and Democrats but Libertarians.

I have been correct in my stance that COVID-19 was over-hyped by the media and actions taken by various governments in the United States have been excessive. Based on the death numbers, especially here in Florida, this has proven to be correct. Whereas the economic impact has been devastating, worse is the psychological impact it has had and the negative health consequences unrelated to COVID-19. I will be eager to see the numbers as they come out throughout the year on government actions which have caused an increase in cancer and heart disease deaths as many Americans have been fearful to go to the doctor or the emergency room. As we sit here on May 1, 2020, I realize while we should have taken various voluntary precautions to prevent the spread of COVID-19, and other viral diseases, the actions taken by our governments have been excessive. I have been correct that the number of deaths in Florida would never exceed those of regular influenza that hit us every year. This year the predominant strain has been H1N1.

Here in Florida, here are the leading causes of death with the most definitive figures available. While as of this morning COVID-19 has killed 1,268 people in Florida, it still has not reached close to the levels seen in this chart. Influenza and pneumonia kill far more people each year in Florida than COVID-19; however, why don’t we shut down the economy each year from January through March to save 3,000-4,000 lives? We don’t because we have accepted those number of contagious disease deaths will happen each year and we go about our business as usual.

Why don’t we take more Draconian actions to prevent the large number of deaths due to heart disease and cancer? While they are not communicable diseases, we have definitive proof we could save tens of thousands of lives each year if we somehow magically banned the sale cancer-causing and heart-disease causing foods, drinks, and other substances. We don’t do those things because they are not popular politically, and frankly, it is an idea that would create an underground economy of banned goods. So, we accept that a certain number of people will die each year because of drinking alcohol, eating fried foods, consuming processed foods, and smoking.

I have been incorrect in forecasting the death rate (number of confirmed cases/deaths). We can explain part of this because the official numbers coming from various sources are dubious and I hope we have a better way to code deaths. Dr. Birx has said during one of the President’s Coronavirus Task Force press conferences that “We’ve taken a very liberal approach to mortality.” Someone can die of a heart attack and be asymptomatic with COVID-19 and they still record it is as a COVID-19 death. 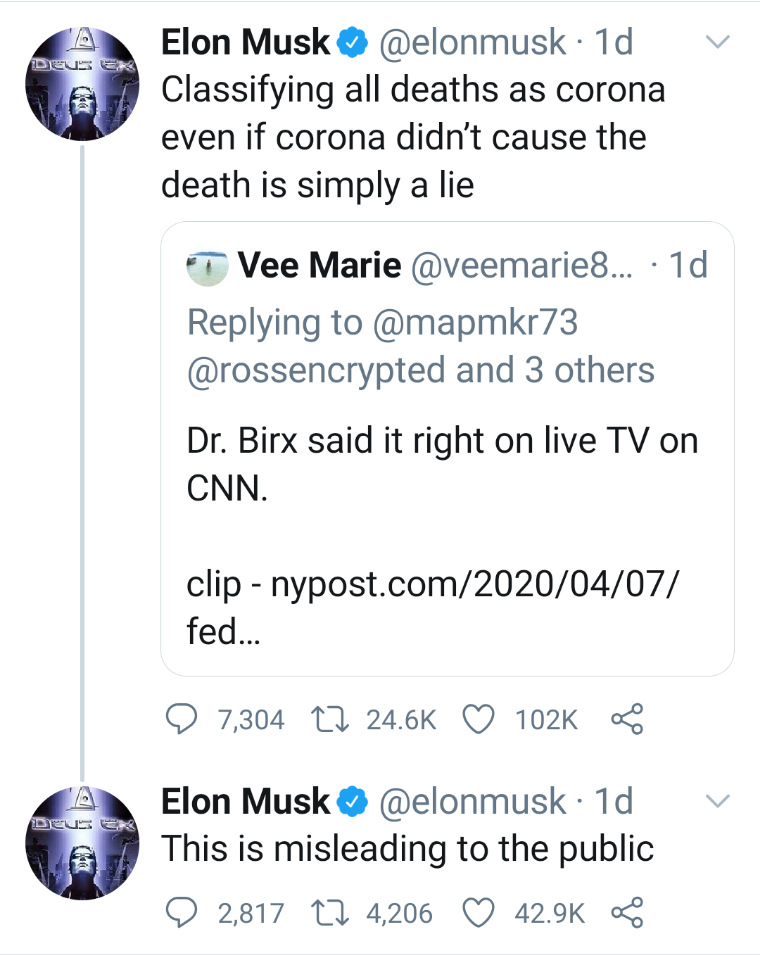 So the official figures, unfortunately, are heavily skewed. In Florida, we have had 4,000 people die of influenza (including 13 children) while 1,268 in Florida have died of COVID-19 including zero children. I was also incorrect in the number of Florida deaths as I never thought it would exceed 1,000 this season. While every death is tragic, with a population of 21.5 million people, Florida has been nowhere near as affected as what the “experts” had predicted.

It would behoove all of us if we had more accurate reporting of deaths and more availability of testing for COVID-19. It almost goes without saying that once a vaccine is created many will take it every year while others will not. We should also get better at forecasting as this time around, the forecasting has been highly inaccurate.

Lastly, we never should close our economy and have our governments spread out “helicopter money” onto the masses. The financial ramifications will be challenging as opposed to doing the alternative. There are no rosy scenarios when something this major comes our way, but there are better ways to be prepared and better ways to handle it. Had we been reducing our federal debt and our deficit spending over the last few decades, this last situation would have been more palpable, financially.